Metal or thermal spraying is a technology, which protects and greatly extends the life of a wide variety of products in the most hostile environments and in situations where coatings are vital for longevity. The variety of metallised coatings is vast but can be broken down into two main categories. These include finishing coatings, such as anti-corrosion or decorative coatings, and engineering coatings such as wear resistant and thermal barrier coatings.

Metal spraying is carried out in a wide range of anti corrosion and engineering markets, including oil and gas, construction, petrochemical and marine. Corrosion is a major problem for these industries. There are four commonly used processes in thermal spraying; Flamespray, Arcspray, Plasma Spray and High Velocity Oxygen Fuel (HVOF), but only two of these, Flamespray and Arcspray are normally used for finishing coatings. 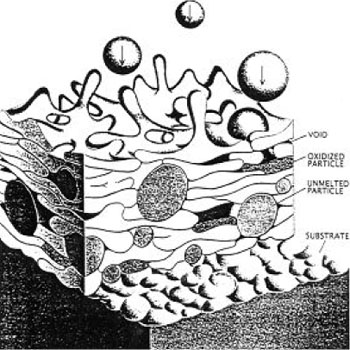 All methods of thermal spraying involve the projection of small molten particles onto a prepared surface where they adhere and form a continuous coating. To create the molten particles, a heat source, a spray material and an atomisation/projection method are required. Upon contact, the particles flatten onto the surface, freeze and mechanically bond, firstly onto the roughened substrate and then onto each other as the coating thickness is increased.

As the heat energy in the molten particles is small relative to the size of the sprayed component, the process imparts very little heat to the substrate. As the temperature increase of the coated parts is minimal, heat distortion is not normally experienced. This is a major advantage over hot-dipped galvanising.

In the wire flame process used for most anticorrosion coatings, a wire is fed by a driven roller system through the centre of an oxygen-propane flame where it is melted. An annular air nozzle then applies a jet of high-pressure air, which atomises and projects the molten material onto the work piece. The driving of the wire is typically via an air motor and gearbox that forms part of the pistol. Wire diameters that can be flame sprayed as standard range from 1.6mm to 4.76mm (1/16” to 3/16”). Wire is typically dispensed from coils or production packs (drums).

In the Arcspray process, two electrically charged wires are driven and guided so that they converge at a point and form an arc. An air nozzle atomises the molten metal produced and projects it towards the work piece. The driving of the wires is typically either by air motor or electric motor and gearbox arrangement. The wires can be driven in three different ways, all which offer
individual benefits. 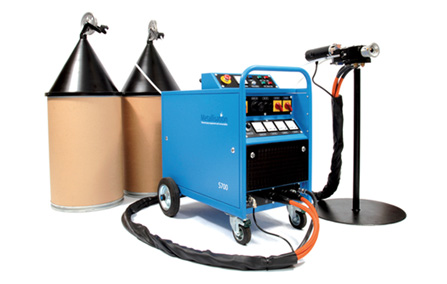 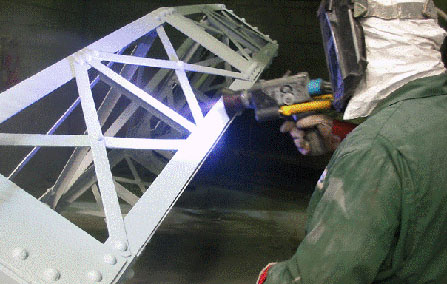 Why use flame or arc?

This sounds like it should be an easily answered question, but, as with many engineering situations, a clear and precise answer is not available. In some instances, the coating properties achievable by one or the other processes does provide a simple answer. For example, arc sprayed aluminium has a bond strength that is approximately 2.5 times higher than flame sprayed aluminium. Other factors include deposit efficiency, ease of operation, safety/spray environment, changeover time, maintenance time and costs, coating finish and ease of automation.

The above considerations give an insight into the wide range of variables when choosing which process to use. It is worth mentioning that a matter of personal or local market preference can also be added into the decision matrix.

Thermal Spraying is not a new process. It has proved itself to be extremely effective in the 90 years of its existence in all manner of applications ranging from coatings in gas turbines to corrosion protection on park benches. As a protective system for structural steelwork it is unsurpassed being the only system, recommended by International and European standards EN ISO 14713 as giving greater than 20 years to first maintenance in very aggressive environments such the marine splash zone (category lm2) as well as all other categories.

As can be seen from table 2, two commonly used materials for corrosion protection are aluminium and zinc. A third material is zinc/aluminium alloy (85%Zn / 15%Al). The choice of material to be used is a vast topic with many factors to be taken into consideration such as environment (corrosive atmosphere, temperature etc.), local authority specifications, life expectancy of the coating, adhesion requirements, availability of material to name but a few.

Metal spraying is a very flexible process. The range or materials that can be sprayed is almost limitless. In effect, if a material can be heated to its melting point without boiling away, the material can be sprayed. Other common materials used in finishing applications are Copper, Aluminium/Bronze and Phospor/Bronze, often used for decorative purposes. Also, a wide range of steel materials can be used for corrosion and wear protection.

The range of applications that metallising is used for has mainly developed as a result of the limitations of other available processes. For example, new bridge sections are often sprayed to offer maximum corrosion protection. The ‘I’ beams can be as much as 40m (120ft) long, 4m (12ft) high and 2m (6ft) wide. Obviously, this is too large for the average hot-dip galvanising tank. The process is also transportable, so structural steelwork can also be sprayed on-site or repaired where on-site welding has removed the galvanising. Other common anti-corrosion application areas are off-shore oil platforms, ships, fences, underground pipes, electric rolled welded (ERW) tube manufacture, multi-void aluminium tube manufacture, LPG cylinders, water / fuel tanks, external and internal steelwork and playground furniture. This is a very short summary of a virtually endless list of applications. 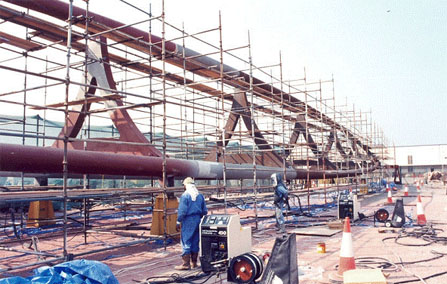 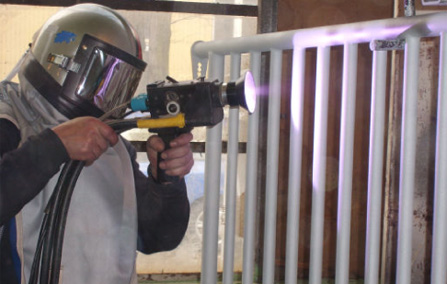